Key point of this diagram: POTUS & Members of Congress are motivated by different interests & goals

Why does this graph make sense? 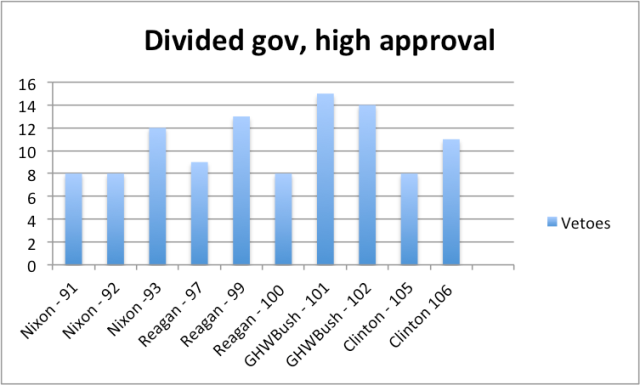 In the effort to thwart another attack at home, it is necessary to gather intelligence information from many different sources. The National Security Agency secretly has been authorized by the president to conduct eavesdropping inside the United States without a court warrant. Since 1978 the process of obtaining information has been overseen by a special security court, known as the Foreign Intelligence Surveillance Court, or the FISA Court, which quickly grants warrants for domestic surveillance. But in 2002, Justice Department attorneys wrote official legal opinions justifying the NSA eavesdropping program, contending that the Constitution gives the president expanded powers in wartime to order warrantless surveillance and arguing that the administration didn’t have to go through the FISA Court. When they became public in 2005, these actions raised concerns about potential violations of the Fourth Amendment protections against unreasonable searches and seizures.
Executive Branch Team:
You are a member of the executive branch and along with the president, you have dedicated your career to being tough on terrorists and doing whatever is necessary to eliminate their threat to the United States and the world. You believe this is a different kind of war, with an elusive enemy that is not part of any nation-state and can harbor itself anywhere in or out of the country. New rules of engagement must be devised to eliminate this threat. As members of the executive branch, you work in concert with the commander in chief to execute the constitutional duties of the presidency.
You believe the powers of the executive branch are broad and allow the president to take EXTRA-ordinary measures in extraordinary times. Speed and a high level of secrecy are essential tools in this endeavor. In many cases there is no time for deliberation or debate. As a matter of common practice, the president can and will issue a signing statement that provides instructions to members of the executive branch on how they are to implement a law according to the constitutional duties of the executive branch. This can mean that the signing statement nullifies the law because the Constitution doesn’t permit the legislative branch to pass a law usurping presidential power.
Congressional Team:
You are members of Congress. You are committed to successfully waging the War on Terror. Within your group are people in both parties who have supported the president’s past actions in the War on Terror and feel that generally the policies have been sound. Others in the group, though initially supportive, have become concerned and even critical of the president’s actions and policies in conducting the war. Many feel the progress of the war is waning or misdirected, the American people are no safer than when the war started, and world opinion of the United States has degraded.
Many members of Congress feel it is imperative that the executive branch works with Congress, not against it. The opposing political party is now in the majority in Congress and feels it’s time to once again be a major player in matters of national security. Some feel the actions of the president have taken on a character dangerously close to unconstitutional. Many members of the minority political party, though still supportive, are also concerned that the president has taken some questionable actions. Members of both parties have begun hearing of some policies for the War on Terror proposed by the executive branch that might violate national and international laws.
Consider:

When you meet with the other branch,  review the first three bullet points from the above questions. Identify differences in your policy or positions. Try to come to some sort of agreement on what the policy will say, how it will be created and how it will be implemented.

See: Spying on the Homefront Interview with John Yoo

Pushing the President’s Agenda in Congress

What challenges did the Clinton and Obama Administrations encounter? What factors led Clinton to fail and Obama to succeed? What were the political and policy consequences of pushing health care legislation early in their Presidency?

Harry and Louise make a comeback in 2008 — this time they’re singing a very different tune. What changed?